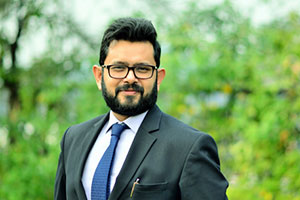 Soorjya graduated from Symbiosis Law College, Pune, in 2003 and completed his LL.M. from the University of Bristol, U.K. Soorjya started his career as a counsel, practicing at the Original Side of the Calcutta High Court, before moving on to Amarchand & Mangaldas & Suresh A. Shroff & Co in 2008. He joined the Firm in 2011.

Soorjya’s experience encompasses the entire gamut of dispute resolution, including commercial, civil, criminal and constitutional. He has advised a number of multi-national entities during his stint as a litigator and worked closely with the Future Group, Tata Group, Aditya Birla Group and renowned financial institutions like the Bank of New York, Mellon.

He has also been involved in a number of international and domestic arbitrations advising engineering giants in the power, automation and infrastructure space.

He continues to represent clients in various fora including High Courts across the country, Supreme Court of India, Company Law Board, other quasi-judicial authorities and in arbitration proceedings (ad hoc and institutional).